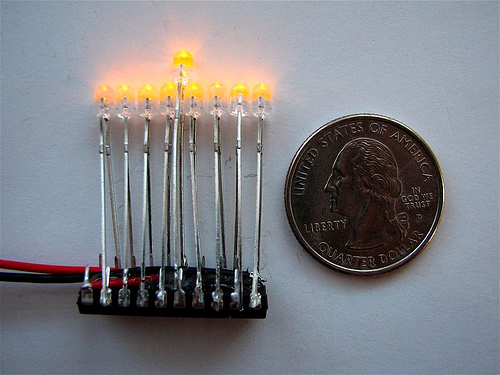 I can’t spell Hanukkah which is probably okay because I don’t really celebrate it. However as the Most Jewish member of the high school I work at, I felt it was my duty to make sure there was some sort of menorah around holidaytime. If you’ll recall, there was one last year but it got stolen. Well it turns out it wasn’t even stolen but rather mangled by an angry kid who was stuck in the principal’s office. It was never replaced. “Where do you get a menorah anyhow?” the lady in the office asked me. I had to admit I wasn’t sure. I did go around telling people the story of Hanukkah [somewhat cribbed from Wikipedia] and answered a few FAQs [no there’s no Hanukkah bush, no it’s not really a major holiday, no there’s no Christmas tree involved, yes I still like cookies].

Yesterday I went to the school to pick up my car after its oil change — just another wonderful perk of working at a voctech school — and I found a little clip art menorah which I put on my classroom door. I don’t really have a classroom per se. That is, I don’t teach a class at the school. However, I’m there enough and there’s a free classroom so one of the rooms has come to be known as “Jessamyn’s Room” There’s a door decorating contest at the school where each class decorates their door in a holiday theme. This is the predictable presents, trees, red and green whatnot. Each classroom also adopts a family, a family from town having trouble making ends meet who gives the school a list of things they could use. From my position the lists are terribly poignant. No one’s asking for gameboys, they’re all asking for things like warm socks and a pair of women’s jeans, size 32. The kids all chip in to not just get the things on the list, but stocking stuffer stuff also. They then assemble and wrap it all and put it under the school tree which is out in the hallway and the families come pick up the presents right before the school shuts down for the holidays.

I used to have a pretty GRARGRAR opinion of the oppressiveness of Christmastime. Too much religion in my Wintertime. Too much shopping in my long dark nights. Too many well-meaning people not considering that other people might have different culutral traditions, or different choices, or different types of families. I’m still not totally pleased with the whole creche on the town commons thing, but I moved and I hear they don’t do that anymore since someone stole the baby jesus. Being more of a fixture at the school where they actually take pains to make sure the holidays are about sharing what you have with the people in your community, where it matters to people that everyone has enough, has really allowed me the room to enjoy the stressful Thanksgiving to New Years streak in a way that hasn’t worked as well in the past. Last night, when it was dark outside and I was leaving the school, I colored in one candle on the clip-art menorah.