Got a Blaupunkt [doesn't that word sound good in your mouth?] stereo for my truck. I seem to remember that these were high end stereos in high school. This one sounds okay. Also bought some silkscreening equipment and a $3.25 lunch at China First. I have been listening to the same Goodness song over and over again for three days. This is one pesky Summer.

I saw Peter Buck downtown today. He gave a homeless guy some change and then headed into the Taboo Video store on First. This was when I was coming back from a free Goodness show and trying to see a free Bakshish show, but was let down by the Stranger for not the first time.

In other news, I may increase my Board of Directorships by exactly one by working with the Speakeasy Foundry to help link communities with technology in real useful ways [not the Microsoft "Here's $100,000 worth of equipment. What do you mean your staff doesn't know how it works??" approach.] Anyone who finds this interesting should talk to me or rad Foundry head Norma Jean Straw.

from today's email: "You were in my dream last night. You brought me to some dark apartment with these freaky women who had their shelves stocked with various brands of "I hate Men" spaghetti. I could tell they didn't like me... Was weird."

The bus driver blew past my stop when I was on the bus and to apologize he gave me four free transfers that were good for six hours each. Of course, I have a bus pass...

Pier is having a gallery opening the same night as Odd Stock but hers starts at 7. Please check out her rad photographs, some of which are of me [see at right].

Somehow my calendar on my computer jumped ahead a day so I thought I was more behind on this journal than I really am. Can they do that on their own?

I have gotten very sincere apologies from the City of Seattle and Seattle Public Library about getting maltreated and harassed by their employees. I requested an apology in writing and got all sorts of reasons why not. Screw 'em.

I passed my drug test! I didn't get the job anyhow...

Won another softball game 16-15. Got on base three times but so did everyone pretty much.

In the past five days I have:

Is it me or are guys goofy on the mars car? Every guy I've spoken to in the past few days [with the exception of Jack who, when asked about the mars car, said he didn't think we should let martians drive around on our planet] can't get enough of the mini-destructo-robot. Most of my female friend couldn't care less or are a bit uneasy about the whole Manifest Destiny thing. 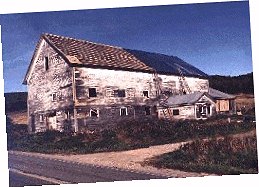 Is it wrong to love a barn? This picture is of my dream house in West Topsham, Vermont [near Groton]. It is a little hippie house, a four story barn and 40 acres of weirlderness. I want to move there when I tire of Seattle which I expect will be in about 18 months. I am looking for interesting ideas of what to do with a four story barn and, ironically enough, a caretaker to keep the pipes from freezing and nurture the place until I'm ready to pack up and move.

Saw Men in Black yesterday when I was trying to see Chungking Express. It was fun, stupid, somewhat exciting and featured Tommy Lee Jones [who was Al Gore's Harvard roomate] getting to be a goof and Will Smith running around a lot. The re-entry to Seattle has been going reasonably well, so far.

I just got back from ALA and have responded to a heck of a lot of email [and 2 phone messages, oh and I got a letter from my Mom] and am going to go to sleep instead of working too hard on this entry in keeping with my Three Steps to Relaxation plan which goes something like: always prioritize enough sleep, enough food and being around things that smell nice. I ignored my own advice last week and wound up with a cold. Feh.