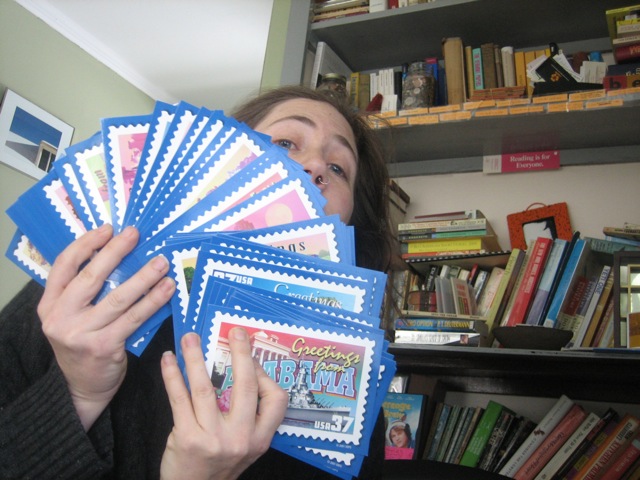 I have been working on a slow-motion project that I thought I could mention once I was finished, but now that it’s ground to a halt I will mention it now. I got a package of fifty US state postcards at the Tunbridge Post office for a few bucks. This was a month ago. I figured “Hey I know someone in every state, right?”

Wrong. I know someone in every state except North Dakota and West Virginia.

The project started out like gangbusters. I set a limit of five postcards a day at the outset. I sent postcards to family, friends, librarians and other random people I’d exchanged mail with in the past. Things started to slow down after the first 30. Once I was down to 15 I started trawling facebook looking for friends in regional networks. Once I was down to eight I took them to the Computers in Libraries conference and specifically sought out people from distant lands like Missouri and Mississippi. Then I asked Twitter when I was down to five.

Now I have two left. Does anyone know anyone in North Dakota and West Virginia? It’s embarassing for me because I stayed in Fargo at one of the most fun library conferences I ever went to: NDLA. I stayed with a librarian and her family who had the same last name as me and we watched a Daniel Johnston documentary. However, I’m not sure if she’s still working at the same library and I felt weird pitching a postcard into the void as if it was somehow cheating, so I’ll wait. And West Virginia, I’ve been there too. I was totally surprised it would become a sticking point.

So, at this point I’ve sent 48 postcards (plus a few extra for states where I got multiple requests). Including the cost of the postcards, that’s under $20 for a project that kept me busy and problem-solving for well over a month and hopefully cheered up a few folks in various states of the Winter that never ended. Hooray for the mail!

update: mailing the 49th and 50th postcards today, thanks everyone!