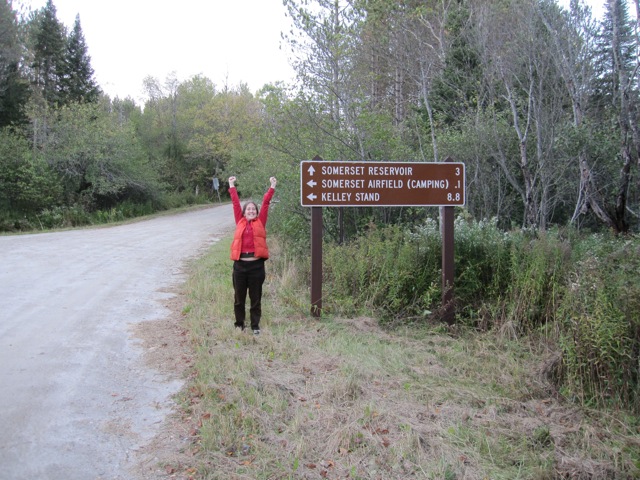 So hey, Autumn! I’ve broken free of the rapturous stupor that is fall around here. There has been some rain. The leaves are more a mushy brown memory than a glowing poppy field of possibility. And I’ve been getting stuff done, somewhat subdued by the seasonal allergies that characterize this time of year for me.

The biggest thing that’s been on a ten year To Do list was the 251 Club. I can now say that I’ve set foot in every town in Vermont. I started this officially sometime back in 2004, when I had to roll my own website just to keep track of this stuff online. Now there’s an official website and hey I’m helping them maintain their mailing list in exchange for a membership. The last town on the list was Somerset, population five, mostly home to a giant reservoir, a campground and some hiking trails. I couldn’t tell from the gazetteer, but it’s also in the shadow of Mount Snow, a place Jim used to go when he was a kid, so the closer we got, the more he was saying “This all looks familiar” It’s interesting driving around a deserted ski area in off-season.

So, with little fanfare, I finished up. Jim and I split a beer by the reservoir. I’ll write the 251 Club and probably get a note in the next (print) newsletter. And because I’m not much for resting on my laurels, now I want to go back and “do it right” and take a photograph in each one.

In other accomplishments, I sent in the second draft of my book and it’s on its way to the production department. It should be ready to ship on March 30th, my sister Kate’s birthday. And I went to the doctor to figure out why my nose has been half-stuffed up since April. And I’ve started my drop-in time up again, teaching people to use a computer mouse and related basic computer stuff. I don’t know if I mentioned that the panel I proposed for SXSW, Offline America, Why We Have A Digital Divide, was accepted in the first round, so I’ll be in Texas again in March.

Meanwhile October is ramping up. The public speaking stuff I do has been dropping off some. I’ve gotten more picky, there’s less work, and it’s possible people are less interested in me and/or the things I talk about. I have very little perspective on this sort of thing. I had someone turn me down, after inviting me, because I said I wouldn’t, really couldn’t, work before 11 am. So starting in November there are big gaps of free time. I know I often say this and then fill it all up before it arrives. We’ll see. I am hoping to be able to get used to being okay with big open spaces on the calendar, good times for woodshedding some new ideas, reading books, dreaming new dreams.