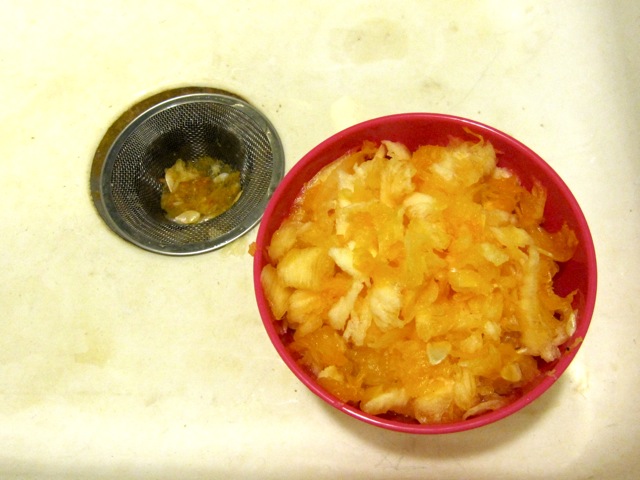 So according to my calendar, I’ve been away or home with houseguests every weekend since early September. Last night I got home after doing my last talk of the season and I slept for 13 hours. This morning I got up and contemplated an empty calendar. I can tell things are mellowing out here somewhat when I catch up on my RSS feeds and my sweeping. But things aren’t so relaxed that I’ve figured out where to put all the Scientific American magazines or sorted out my CD collection. This bowl of pumpkin innards was in my sink for way too long.

My new-to-me car seems all modern compared to my last one but it does actually have a tape deck, so it’s been somewhere between 1984 and 1994 in the car most of the time. It’s been fun and weird to drive around listening to mixtapes that people made for me in high school. Most of it is music I still like. Some of it is music I’ve been missing. Jim and I had a “Woah!” moment when one of the mixtape songs came on and I said “This is that song I’ve never been able to identify, even though I’ve Googled and Googled” and he said “What? This is Tribe.” And it turns out that the word that I thought was Hoedown was Down Home and suddenly it was all there.

Related big grins in my highest ever Scrabble score [against a well-matched opponent]. Jim and I have played somewhere around sixty+ games since we started keeping track. Until Wednesday we were about twenty points apart in total scores. Somehow the stars aligned and I got four seven letter words and pow pow pow. Luckily, we play using the Internet Scrabble Club which lets you replay games for kibitzing and nerd purposes. So, I made this little movie about the game, well OF the game really.