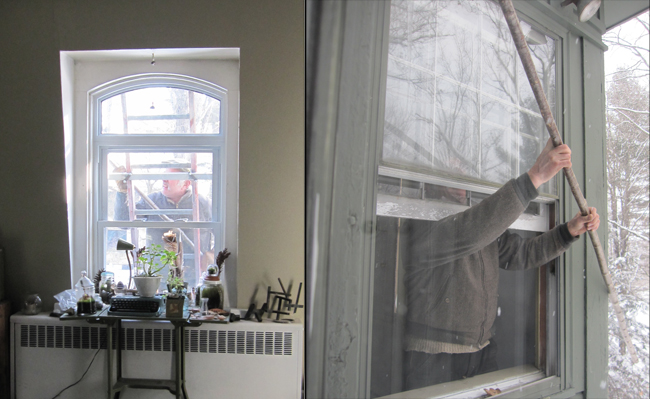 So just as I was thanking my lucky stars that this has been a disaster-free year, the bathroom ceiling starts leaking. Mercifully this is not actually a bathroom ceiling belonging to me, but one that I rent. So I called my landlady who told me the ice-breaker man would be out in the morning. Another small mercy: morning meant more like 11 which meant I was awake by the time the terrible crashing started and pictures fell from the walls.

For two days in a row Terry came by and hacked huge chunks of ice off of our roof, sometimes from ladders, sometimes from windows, where it would fall two stories to the ground. Now there is no more giant dam of ice keeping water on the roof where it leaks into my bathroom. As I mentioned on Twitter, it’s like our own version of Most Dangerous Catch. Terry is a bit of both a local legend and a town trade secret. He seems to love the work and is good at it. My bathroom has dried up and I’m optimistic that if it starts leaking in the future it will be handled. It’s snowing outside and I’ve got noplace I’ve got to be. Not bad for Winter so far.