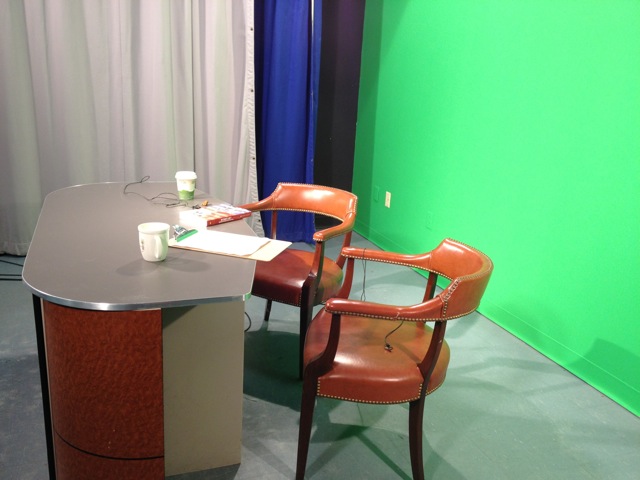 I’m still sort of experimenting on what works here and what doesn’t. Uploading photos–such as the one above, of the ORCA Media studios–took about twelve tries to get right and I’m still not totally sure I like what I had to do to fix it [chmodding 777 for those of you who are curious, please ignore this for those who are not]. But anyhow, here’s a photo of what the space looked like when I was on public access television last week. A fellow teacher, Mike Abadi, does a public access show about blogs. Which is a smart idea around here because we’re still in digital divide-land. So I got to talk about my book and the digital divide and corporate ownership of the internet and all those things I like so much. You can see the full video on YouTube in case you’re not in the teeny public access coverage area (and I wouldn’t be able to tell you if you were honestly, being one of those no-tv-having goobers) of the station. Interestingly, I got to see a coverage map for the entire state and Topsham, where I used to live, has NO public access channel. I’m surprised that’s allowed but I guess they have no cable. Surprising. I am thinking it might be fun to have a public access show.

This weekend was a big weekend of cooking and walking around in the winter-but-not-snowy-winter. Jim and I finally checked out the bowling alley in town and it’s pretty nice. After a mercifully boring trip to the dentist (I have finally found the perfect non-chatty non-radio-listening dentist of my dreams) I am hunkering down, trying to get some sun and getting ready for the Christmas Bird Count which is this weekend. If you want to count birds in your area and help the National Audubon Society track bird populations, check out how to get involved.