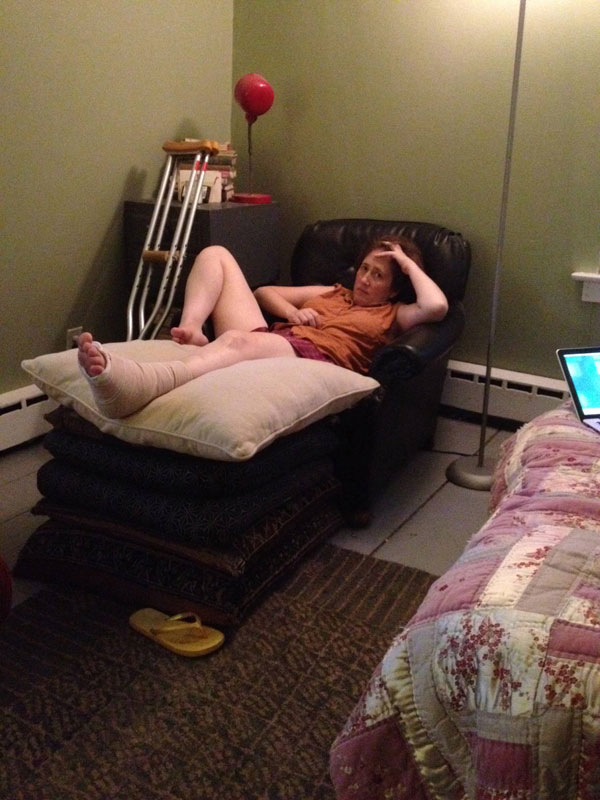 What a week, things were going great. I was getting sequential full nights of sleep for days on end, not a care in the world, no more falling down barn to haunt my dreams. Then on Friday night when Kate was heading down to the South Coast, she tripped [“over nothing” she said] and wound up headed to the hospital and sent home with an air cast and instructions to stay off her foot. How lousy! I sympathized and said I’d think healing thoughts towards her while Jim and I were off to a celebratory “I sold the house!” dinner and then a local baseball game.

Except, as we were talking the scenic route to Montpelier [via a few more Vermont towns I wanted to photograph for my new 251 quest] I got out to take a photo, stepped in a hole of some sort and heard a crunching sound from my ankle. I limped home crabbily and didn’t think too much about it, I’ve sprained plenty of ankles, I seem to have loose ligaments. But as I was getting up to go to the bathroom a few hours later and still couldn’t put any weight on my foot at all (after RICEing and ibuprofen), I took the standard Ask MetaFilter advice when someone is debating heading to the ER and called my health insurance, described my symptoms and they were like “Yeah may as well get it checked out.”

So, not 24 hours after Kate’s visit to the hospital I was in my local emergency room–which is pretty much across the street from my house–hanging out with the dirt bike injured and waiting for my turn at the x-ray machine. The verdict was “avulsion fracture” which isn’t as nasty as it sounds. I asked the doctor “Does this mean I have a broken leg? A broken ankle?” and the answer was not really. So while me and the ER nurse were chatting about how terrible it is when people come to the doctor after looking stuff up on the internet–a favorite topic for doctors as well as librarians–I got a lot of bandages wrapped around my ankle and some high test ibuprofen and was told to stay off of it and come back to talk to the podiatrist on Monday.

It should surprise no one that I am not the world’s best sit-at-home patient. I also live up a flight of 28 stairs (which I scooted down on my butt to go to the hospital). The good news is that having a low key weekend hanging out and watching movies and eating snacks is one of the things Jim and I like to do. So he did some food shopping, I borrowed a pair of crutches from my landlady, rolled up all the rugs to avoid mishaps and we settled in to do not much of anything. I traded cranky ankle stories with Kate, my left-handed sister who had messed up her right foot. As you can see from the photo, I did the opposite.