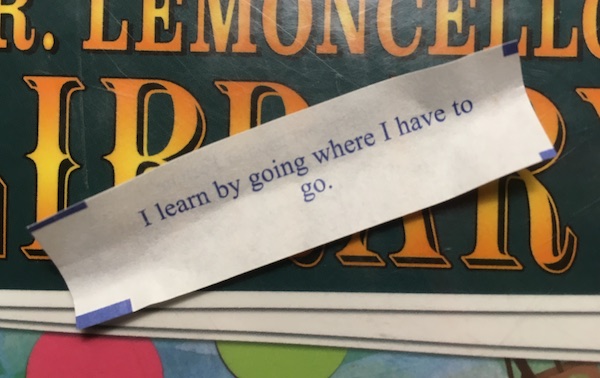 So I lost that job I was sort of excited about. And when I say lost I mean I was summarily fired last Friday afternoon with a vague collection of reasons after working there eleven days. I’m not even mad so much as “Wow, I guess that was a terrible fit, huh?” I own my part in it. Here’s the story anyhow. This is not intended to be a call-out, so I’m leaving some things vague.

This company, or rather, one person at this company who I had worked with elsewhere, had been asking if I was interested in work since last January. I had a Skype interview that I thought went well, where they said “We’ll call you” and then didn’t. Contacted me again later in the year and we slowly started putting together a gig for me there. I have a lot of requirements, but I also work my ass off. I think I’m a good employee but it depends what you’re looking for. Eventually we settled on ten hours a week contracting (temporary but maybe an option to extend) at a rate of pay that made it worth it. I’d be doing spam fighting. Not glamorous, but necessary, and really interesting in a puzzle sort of way. This company uses an agency to do all the hiring for their part-timers, so I’d technically be an employee of the agency, but this was seen as a mere hurdle. I started the process in June.

Onboarding was a serious pain in the ass. You can read the set of tweets about it here. Being publicly grousey about this may have been part of the issue, but who knows? My future manager saw my tweets. Heck, he listened to the MetaFilter podcast where I talked about the job. I presumed he knew what he was getting into. I had to e-sign fifteen different documents, read dozens of curiously formatted URGENT emails, get logins to four different portals and a new Outlook email address, and drive to a service center to show someone my passport, all before I got any credentials at the job. There’s a longer discussion about how the tech industry treats contractors generally, I just figured this was a temporary hassle, a one-time gauntlet. My soon-to-be manager was with me sympathizing every step of the way. I had a STAFF badge on my profile page.

All the documents requiring signatures could be signed by checking a box, or you could draw something in a signature box. There was no room for discussing the terms of the contracts, one of which was a loyalty oath. I won’t lie, I had fun with this. Signing my NDA “ABOLISH ICE” was probably something I’d do again, but it was also something that got called out as “unprofessional” and I can’t argue with that. That said, the agency approved all my signatures and everything else and cleared me to work on the 5th of July. I thanked them and told them about the typos I’d found in their documents.

My job start was delayed due to the difficulty of getting my work laptop to me as I was traveling for the holidays, rural package delivery is always a challenge. I wasn’t expecting to be given a work laptop, so I got to add “learn Chrome OS” to my todo list which wasn’t that difficult but did take some time. The regular workers at the company mostly use Macs. On July 11th I got all my credentials, set up various two-factor authentications, and did a little training. I worked every day from then until the 20th, sometimes just a little, sometimes a few hours. The work was fun, the people were nice. I really liked being on a team. I really enjoyed having a boss who was good at being a manager and seemed to like the work I was doing.

Friday the 20th I got a phone call from my manager at 5 pm saying the agency could not extend an employment contract to me. He had received an email from one of his superiors and was asking me if I could think of why that might be. I could think of a few possibilities but was pretty confused. Then I got a call from the agency saying my “assignment was wrapping up” which I knew wasn’t true. I asked for some clarification and the woman from the agency–I rag on the process a little, but the people who worked there were pleasant and professional across the board–made a few phone calls and said there were two issues:

My manager had no idea, this had happened without his input. A spam fighting job is technically a security job, my title was Platform Health Security Analyst. Security jobs are more SRS BSNS than other jobs. I am not SRS BSNS, but I am pretty good at following rules. By the time I got back to my computer, all my credentials were revoked, my STAFF badge was gone. My manager said he’d check in with the big boss on Monday but he was pretty sure this was a done deal. I was told I could keep the laptop which had a list price of around two weeks of work. I talked it out with my sister. “Dude, I work for state government and we fire people all the time, this seems like a weird firing.” That said, it was a done deal and so I’ve sort of made my peace with it. I’m even a little hesitant to write about it because of my concern that someone will tell me that the real reason I was fired was because I am awful, or an idiot, or something. I can’t help feeling that there is more to the story, it’s tough to settle with the idea that I’ll probably never know.

My sister and I had Chinese food that Friday and I waited to open my fortune cookie until I’d gotten the final word on Monday that I wouldn’t be coming back. I got the final word. My fortune said “I learn by going where I have to go.” I don’t know if all Chinese food eaters are readers of Roethke, but I was, and I knew this poem. I’d written a report on it in high school. And I could make all sorts of hand-wavey interpretations of it within this context, but it felt good to see something familiar.

I’ve got no wrap-up here except that writing this down is my symbolic “OK now that’s over with.” I wasn’t even there long enough to put it on a resumé. I have some vague concerns that maybe I am secretly unemployable, but they’re pretty low key. My dad had a Bob Dylan song he liked to sing a lot, more than anything parts of it are running through my head, and not always the same part.