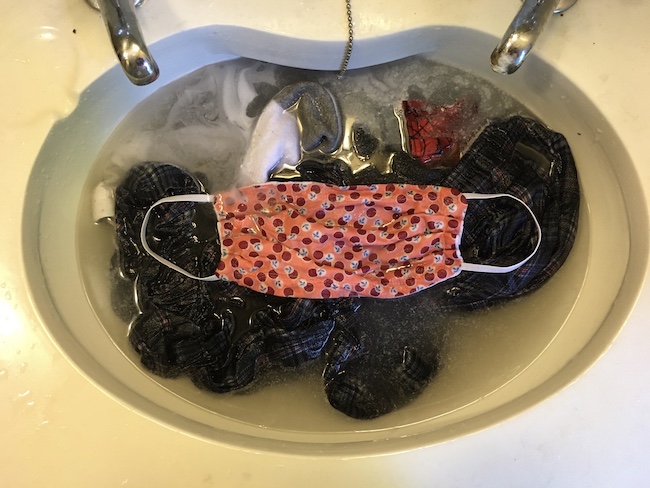 So until Massachusetts gets its COVID numbers more under control, I am likely not going there for the summer, though I’m making noises like “Maybe later…” I might take a fly-by quarantined trip down there. I haven’t been in Vermont for a summer since 2011 I think? And I use the term summer loosely since it’s 50 and cloudy outside and not that much warmer inside. Ronni has done her usual thing of turning the furnace off which seemed like a fine idea when it was 85 outside, less fine now, but I have socks, and one sweater that I didn’t put away.

I’ve been pleasantly busy. Less trivia, a little more leaving the house. Have seen two sets of local friends for distant no-mask interactions and that’s been the fuel that’s been firing my furnace lately. Still not quite up to laundry at the laundromat, even though I suspect it’s fine. I’ve been making some signs telling people that masks are required, even though the governor won’t make them mandatory for people in public. My regular dog walking partner is back at work which means sometimes I have to find ways of getting my own exercise and not just being a passive walk-along, though I’ve enjoyed that greatly. As Vermont shifts to kinda opening up some more, I’m mostly not ready to shift along with it, though I’d love a good cheeseburger and should probably get one.

I’ve been thinking a lot about my parents lately, both because I am kind of happy to not have to be managing older relatives (though I miss them) and also because they had fundamentally opposing ways of interacting with the larger world. My father was a stay-at-home and work on your home kind of guy. This meant he had a lovely home but also the fail mode of that was becoming a bit of a hermit having mostly internet interactions and developing theories about the world that didn’t stand up to actual-world scrutiny. My mother hurled herself into civics work and volunteerism and town… stuff. She knew a lot of people and they knew her which was deeply satisfying but also kinda tiring/aggravating. The fail mode was that when she didn’t have energy for that, all those social interactions didn’t pivot to a new normal. Some did and some did not.

I find myself with a little of each, mindful that I am a different person from my parents in many ways, but also trying to not replicate downsides of choices they made from different points in their lives. It’s easy to stay at home when you can (mostly) work from home and have a lot of Strong Opinions™ about things that other people are doing. It’s harder to be involved with imperfect systems and do your best to try to make them better. And yet… in the wake of George Floyd’s murder and incredible reactive and visible police violence, thinking about broken systems and broken stairs has been on my mind a lot lately. It’s past time to fix the police. It’s past time to acknowledge the reality of structural racism in America, and in Vermont. It’s worth being incredibly picky about how you align with broken systems, and think about which ones are really even worth saving.