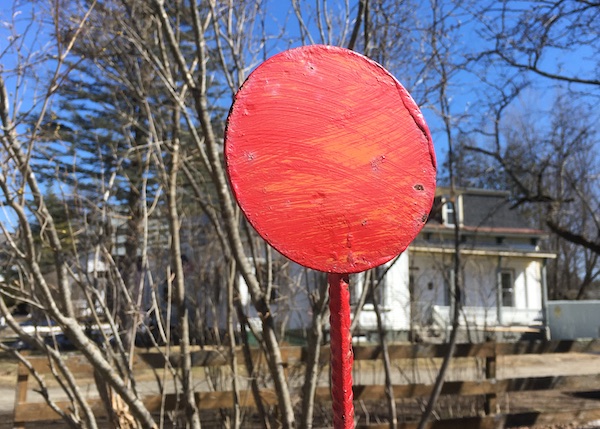 I’ve never understood it, but I sleep well in March. Something about winter being over, the weather still being cold, the days getting longer, my allergies not quite kicking in just yet. This March, a weird March, is no different. Even though I’ve still got a pretty elaborate sleep hygiene ritual, it reliably works this month and I haven’t had an “up til 4 am” sleep fail in a while.

This may be partly because my teeth have mostly stopped hurting, my gallbladder hasn’t been heard from, and I’ve walked 62 miles this month. Just circles around and around the neighborhood mostly. Sometimes with friends and sometimes just me and my thoughts and my camera. This picture is one of those things that live on the top of fire hydrants so you can find them in the snow. And the snow only really exists in little shadow areas right now, so I went out for a walk in my sneakers today, the first time since… I don’t know when. Which is good because my hiking boots are starting to really show the wear. I haven’t been treating them any differently, but I’ve been wearing them a LOT more and, surprise surprise, that matters!

Today was the “Hey 50+ year old people, get your vaccination appointment!” day. So I did. Fortunately, bad web interfaces don’t faze me much but oy! I made a mini-tweet thread about it this morning (yep, I got up early) and I don’t have much more to say except I’m sad for all of us that this is the path to safety and it’s worse than it needs to be. My year hasn’t been terrible, it could have been much better. Many peoples’ were worse. Mine has mostly been literally and figuratively walking around in little circles, getting some sunshine, and waiting for brighter and better days.