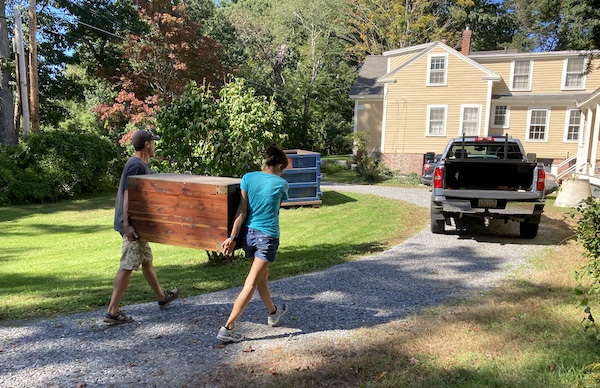 This weekend Kate and I are both home. She’s making pasta sauce, I am waiting for Jim to arrive after we lost a day of visiting to his shingles shot (over-50 folks, get that vaccination too!). The Magic Castle is basically empty and there’s probably one more day of trash removal that needs to happen in the barn and the underbarn. Gotta pay someone to clean the place proper and then go through the long thankless task of replacing the septic and then this place can finally belong to someone else. Then we have the much smaller and less awful task of unpacking the things that we moved to Westport and moving on with one less house. I am HERE FOR IT.

So this is just a gratitude post about the weird and wonderful ways that people and organizations have been helpful. I’m sure I am forgetting some, but here are the ones I am remembering.

Friends, generally – everyone who showed up with food, who offered to show up with food, who took a thing, who accepted a thing that was given (it’s ok if you don’t keep it), who offered to take away a thing that was causing a problem, who offered to help unpack, who helped me load and unload my car, who went on a tour and said encouraging things, who connected us with a person or service or something useful, who listened when we just needed to complain a little. Shown above are former tenants Josh and Shannon taking home a cedar chest that had been in the barn since god knows when.
Habitat For Humanity (and associates) – they have a service in the Boxboro area that will pick up first-floor furniture for free, but will also, for a fee, take other things that they might not otherwise accept and will take them down flights of stairs. Two not-very-large men came and cleaned out some things we weren’t sure how to get rid of.
My local liquor store – for the endless boxes
My local thrift store – for being willing to cheerily accept these boxes once filled with various random things, week after week
The movers (John Palmer) – except for a timing snafu, the three guys who moved the things we had from Boxborough to Westport couldn’t have been better or nicer
Internet Archive – for taking a lot of books that we weren’t otherwise sure what to do with and making it all super easy
The well guys (Skillings) – they found the well! No one ever knew where that damned thing was. And they didn’t have to tear up too much of the lawn to do it.
The water filter guys (Premier) – we installed a full-house water filter system after my Mom died because the water was icky (she never minded, we did) and then it broke when we started using the water in the house more. So we got it fixed.
Lonnie the septic guy – you get the feeling that this house has had a lot of water issues. Lonnie was a nice laid-back guy, sort of half-retired who did our septic inspection. The news wasn’t good but he was as nice about it as he could be.
The metal guys – we had a lot, a LOT, of random trash metal in the basement including a huge motor that was so heavy we couldn’t budge it much less lift it. Mauricio and his crew came and got rid of it with good cheer.
The Hazmat people (Devens HHW) – We drove our hazmat stuff in two cars to Devens’ Hazmat day. Kate knew the woman who worked there and she was incredibly nice
The dumpster guy (HiHo) – Not the easiest to communicate with but reasonably priced and good with timing, depite the Yelp reviews to the contrary. Nice to be able to pay someone local for this kind of service.
Boxborough historical society (BHS) – they took a lot of things (old newspapers, old t-shirts) which we felt weird disposing of
Steele Farm (town link) – they took a lot of farm stuff including the old windmill, a lot of weird metal implements, a few huge ladders, and an old plow
Schoolhouse #2 (details) – they took the old school desks which otherwise I am not sure Kate would have been able to get rid of it
Susan and Bob – while the house is being sold AS IS we had a few minor things that needed fixing just so people could walk around the place. Bob did the fixing, Susan did the communicating and it all got taken care of.
Local eateries – Bravo, Smack Noodle, Oscar’s, Minuteman Grille, and Nan’s kept us fortified
Internet cheering squads – Every nice well-wish or other nice comment or thumbs up or commiseration or whatever has helped us feel not so alone in all of this.