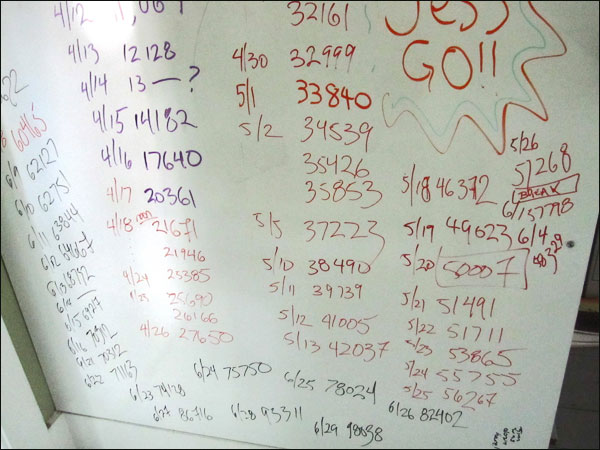 It’s finished! Well by finished I mean I sent it off to the editor and expect to not hear about it for a while. So, from the time my [soon to be] editor wrote to me saying “I’m an acquisitions editor … and I’m looking for someone to write a book on technology and rural libraries. Are you interested in exploring the possibilities?” and the day I emailed the manuscript back to her, a little over a year went by. But really, if you look at the picture, I did most of the actual writing/typing in the past few months. And fractionally, I did an awful lot of it in the last ten days.

This last spurt is not because the book wasn’t basically done, it was, but because there were a whole bunch of other “Oooh, I should really make sure I mention that” ideas that came up when I was sleeping or eating or doing one of the other very short list of things that I’ve done in the past week. This short list did not include much in the way of getting out of my pajamas, showering, exercising, or what I’ve come to call “deferred maintenance” around the place. I did manage to feed the birds, feed me, answer the phone and do a few short stints at an actual library (which would send me home with an “I’ve got to make sure I mention THAT” bee in my bonnet, lather, rinse, repeat).

Anyone following along with Twitter would have been able to follow along with my word-count-as-zip-code which, when combined with a neat looker-upper like this one by Ben Fry gave me a loosely east-to-west trajectory which was a better general way to feel that the project was actually progressing. By the time I turned in my 98506 (Olympia Washington!) word draft, I was not hating it, which is more than I can say about my college thesis.

The book is due to come out in January 2011. It’s for sale on Amazon and it is totally okay with me if you do not buy it. Really. The thing about writing books is that in almost all cases, it’s really not something you do because you’re going to make any money. If I thought I would have been able to keep to a writing schedule through my own independent motivation, I would have maybe self-published if cash were important. I probably have the reputation and self-promotional chops to actually sell the thing on my own. But I never would have written it.

Having a real publisher and a real human editor is the only way this project really got done. And so my 15% or whatever it is that I take home when someone purchases my book basically rounds to zero when I think about how much time I put into it. And with my critique of capitalism generally, and how this revenue split works out, I know my younger self would basically be telling my current self that I’d be the first against the wall when the revolution comes. I’m okay with that. I think people will buy it and read it, and a good chunk of them will like it okay. And with any luck at all they can take some of my advice to heart (whether through agreeing or disagreeing really, just be thinking about it) and use it to help the people who really are getting the short end of the stick in our brave new information age. That’s what I would like, besides a good shower and a nice reunion with the outside world.