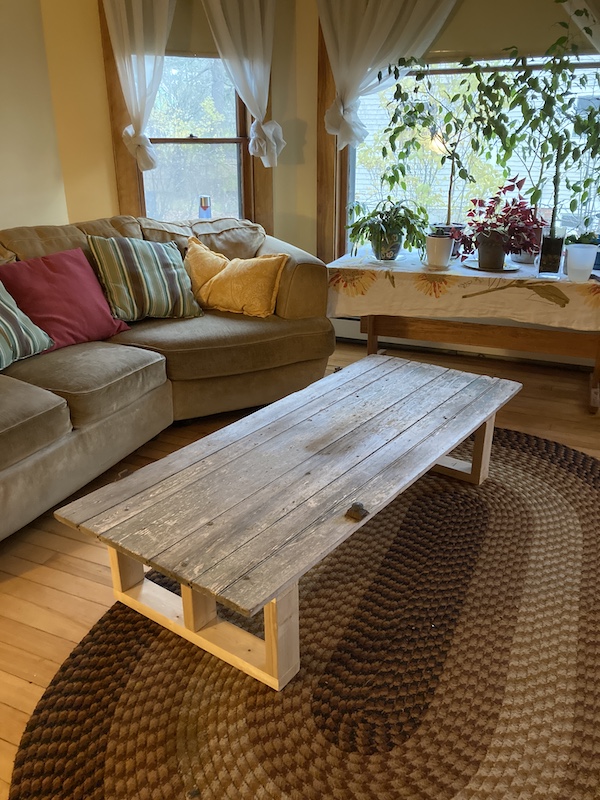 As of this weekend, we have a signed purchase and sale document on my mom’s house, aka the Magic Castle. This was a long time coming. We are also, right now, getting the septic replaced for Massachusetts reasons. The amount of paperwork involved in these two things has been astonishing to me and I work in libraries. The house stuff has also involved a ton of email, much of which was from realtor but also our lawyer who tried to dissuade us from some of the negotiation tacks we took. It’s always weird to be like “I know you are a legal professional but we’re going to go a different direction that we think will work for us” and have it work out. So far.

Also had a friend come and do some handyman work for me including making a coffee table out of an old door that came off the wood shed (or sugar shack, or milking shed, I was never quite sure what that little room was for) at my old house in Topsham. With the completion of this coffee table I now have what I consider to be a full complement of furniture in this place. I’m sure there are a few more things I need (rugs, as I am typing this, I realize I need rugs), but every bed has a nightstand and every room has a light (I am remembering that one of them does not but I only use it during the daytime). I have a functional bedroom, office, living room, and kitchen. I have a place to sit and read that I enjoy. My plants are doing well and seem to like it here. I am able to ignore enough of the “to do” items that I can be comfortable relaxing here sometimes and then doing projects at other times.

The one thing that has so far not quite settled is the endless shopping. For a long time I had a pretty static complement of stuff. I’d buy clothes occasionally and food more occasionally and replace things that wore out or ran out, but this is more like “Hey you have approximately 30 light switches now (my old place had five) and about half of them need screws. Oh and maybe they need those little draft blocker things behind them. And when you look at them close up, they seem a little mungy so maybe you need a brush to scrub them off with?” There will be a time when I’m not making shopping runs to Home Depot or getting trapped in Amazon’s labyrinth of possibilities, but that day hasn’t come yet.

However a lot of what I’ve gotten has come from around here, from other people. The same phenomenon that made cleaning out the Magic Castle such a project (she never got rid of anything!) is also working for me up here (people don’t get rid of anything, and they have extra things!). So I’ve gotten a free couch from a neighbor, bought a reading chair from another neighbor, bought a stereo cabinet from a local person from a facebook group and a tv from a neighbor moving to Arizona who posted it on a local mailing list. A pal brought over an extra chair. A friend gave me a compost bucket. A bed came from an old local abandoned house. I bought five tables of varying fitness from one guy up the road who purchased a house previously occupied by a hoarder. I found a table on the side of the road. I got another table and four chairs for free from a person who lived up the side of a mountain. I bought some floor lamps and a rug from the town’s new thrift store which has very reasonable prices. A man in town delivered some old folk albums he was no longer listening to. I bought a rugged stepladder from an older woman in town who said it was too heavy for her. I bought some porch rockers from the Arizona-bound neighbor who tossed in a wicker porch couch for free.

And I got rid of some stuff. Most of my boxes went to people who were using them to move or to mulch their gardens. My bubble wrap went to Silloway Farm where I traded it for maple candy. The thrift store still receives regular boxes of stuff from me, some because of upgrades, a lot because I just need different things now.

So I think in my dream world, we would have sewn up the sale of the Magic Castle before I moved in here and I could have just outfitted the place with things that were already in the family. And yet also, there’s something to be said for starting from a different sort of scratch. I like looking around this house and thinking about all the different people in my neighborhood who helped me get it to where it is.