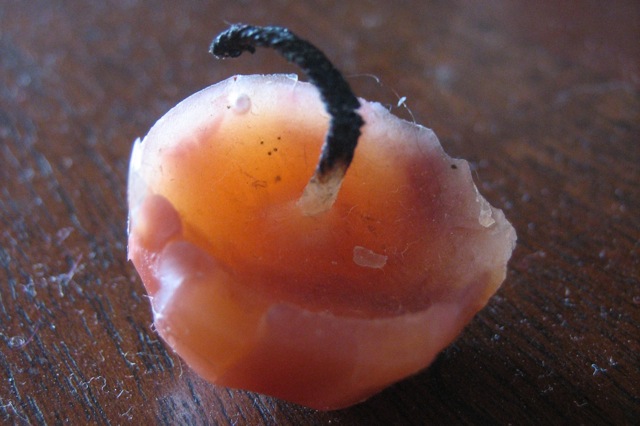 I did that stupid thing I sometimes do when I’m cooking for impending guests. I start too early so that I finish too early and then I try to get creative in the kitchen with all my “free” time. I was going to sweep and clean up during that time, but somehow my broom is outside buried in several feet of snow, so that was impractical. I tried to whip up some strawberry lemon glaze/syrup for the pound cake I’d made the night before based on only what I could remember about making sugar syrups from when I lived in Romania. While I was looking away, trying to see if my concoction was at the “soft ball” stage or whatever, disaster struck! The results were predictably hilarious, but I did learn a nice new technique for getting burned sugar off of a stovetop (cover with wet washcloth, leave for five minutes, wipe, repeat). Fortunately, having chili done early just means it can cook down for longer and it was, by all accounts, delicious. I had ten folks (and three little folks) over. My fridge which was jarringly empty once I finished cooking — chili is really a shelf-cleaner of a recipe — is now full, even after 10-13 people were fed. Thanks to everyone who came by, it was a nice time.

Today after seeing my last guest off with tea and a corn muffin I decided to hunker down and do all that deferred inbox maintenance that has been sort of hounding me since I started getting busy again in mid-February, the sort that is only really possible on Other People’s Holidays. I’m at that sticky point where I don’t know if it’s more uncool to reply to an email from August or just file it away and not reply. Whenever I am patting myself on the back for all my wonderful communicative postal and chat and email and facebook followthrough generally speaking, I look at my inbox and remember I’m just as dragass as everyone else in some respects. I think eight is as good as it gets today… oh wait maybe seven.

The wikipedia deletion debate ended with a more-or-less consensus of “keep.” You can read, but please do not edit, the discussion which is now over, at Wikipedia. I hemmed and hawed about proposing a paper for the Wikimania conference and decided against it. I don’t know at this point if I’ll want to travel to Egypt in the summertime and right now I feel pretty well-socialized and in need of some non-travel time. I also had to pass on an invitation to Bulgaria in May which was a little too close to NOW to be something I could reasonably do. I’d really like to go back to Bulgaria a whole lot. I haven’t been since 1996.

In between that last post and this one, I went to Michigan and had a quick fun flyby of a trip. I gave a talk I really liked about teaching technology, I topic I hope to return to. I also went to the Tuba Museum, saw a bunch of old and new friends and got driven around a lot looking out the window. When I got home, it was snowing. What else is new? I’m in hunker down mode because it’s Spring tomorrow and even though there is icy blech coming from the sky today (and a small scrabbly sounding mammal running around downstairs that I just do not feel up to investigating) I can see a little mud in the ice of the driveway and I went out without a scarf today. It’s something. I got back from the super-techie (as opposed to super-tetchy which can sometimes describe library conferences) SXSWi conference in Austin Texas, drove home through the snow, went almost immediately to sleep and woke up today to a few things.

I have been putting off writing this in the hopes that the whole Wikipedia debate would be closed and I could link to it without appearing to be shilling for people to vote against the article’s deletion. Believe it or not, I sort of trust in the Wikipedia process and figure it will be deleted if it’s supposed to be deleted.

I expect you’re all sick of my re-entry stories anyhow. They’re mostly the same. “Oh hey, I was someplace populated and then I came home and it was unpopulated and the night was dark and starry and I slept….”

My trip to Texas was a joy from start to finish. Flew out of Boston, so I got to have dinner with my sister on the way out. Arrived in Austin and was picked up by my puzzle hunt buddy who put me up (and put up with me?) for nearly a week. He then went to Houston for the weekend and left me to my own devices in his house with his girlfriend who I had not yet met, and an assortment of charming pets with amusing names. SXSW was a blur of friendly faces from the recent and distant past. The panel I was on went really well; my co-panelists — Gina, Annalee, Jeska — are amazing, hilarious women. I spent a day not in conferenceland visting libraries and got to see another Gutenberg Bible (my third!). I played kickball for the first time in I have no idea how long. I lost my camera. It was recovered. I went to a MetaFilter meetup. I went to a few parties. I attended several dinners involving more than fifty people and a few that were five or less. I ate lots of delicious foods including Mexican, TexMex, BBQ, and combinations of those. I went out for croissants at 2 am. I played with OLPCs. I took taxis. I listened to interesting speakers and met interesting people. I sat around with my laptop and people came and talked to me, or I walked around and talked to people sitting around with their laptops.

It was really the just-right conference for this time of year and my frame of mind. I’m really glad I went. You can see a few photos here.

The pool has still not fixed the broken phone and I’m not sure what to do about it except continue to ask “Have you fixed the phone yet?”

I’m pretty sure I got enough snow off the roof. When I went to swim at the pool I realized that I am all bruises up the arms and legs and I was a little sheepish in the shower about it. “It’s okay, I did this to myself!” Clearing off the roof without further ladder climbing — because I decided that was crazy — involved borrowing my friend’s half-broken roof rake (thank you Forrest!) and manipulating it through the two upstairs windows that I could open and open the storm windows for. So, the whole process was a bit like laproscopic surgery where the roof is large and the window is teeny and the rake is long and I am upstairs inside the house, standing five feet away from the open window trying to get a good angle so that I can push the last pile of snow off the far end. Also, did I mention all the electricity and telephone juice comes in the house through the same window, the one that opens? True. Did you know that if you hit that insulator with a rake at a certain angle that sparks fly off of it? It’s true.

So we’re supposed to get snow or rain this week. The pile of snow in the yard — created by the backhoe that my neighbor brought in to put the snow someplace besides the driveway — is now approaching ten feet tall and the neighbor kids are sledding down it. I am not joking. I have to say that the combination of my nifty AWD car and the new socks I got at the Cabot Hoisery have really minimized my annoyances with Wintertime this time around. I’ll have to take some photos before it all goes away, it’s really something.