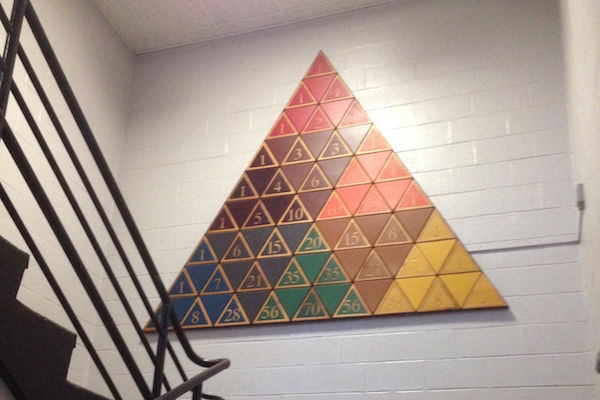 So I got back from Westport last weekend just in time to go the Scully’s for their annual BBQ that can not be beat. And then BAM I was home with class starting in two days. I was a little surprised that school started so soon, so I was only sort of prepared. I missed the orientation because I was at a baseball game so I was a little out of my element. Turns out I have an ID and a key and even a fractional office in the same building as this cool art math triangle thing. I teach one class which is called Web Development but is really more like HTML and CSS. My students are over half CS majors but a few equine studies majors. The class is set up to have two hours of lectures (?) and two hours of labs. I have 34 students. It’s been challenging for all the normal reasons and some digital divide reasons. Here are some photos of the VTC environment that I work in.

The last ten days have been a little busy. I spoke to the White House. I was briefly on Science Friday as a caller. I recorded a podcast talking about the White House talk. I opened a lot of mail. I taught for almost six hours.

I also just got 800+ images off of my phone (I save them all until I get home, my archiving system is ridiculous so I will not share it with you) so I can do a little “What I did this summer as determined by my photostream because my memory is shot” bit here.

I’m heading back down to Westport next weekend because hey it’s my birthday. I decided that instead of doing a Labor Day blowout as in previous years I was just going to hunker down with Kate and Jim and do what my dad used to call The Nothing. I vaguely remember liking it.