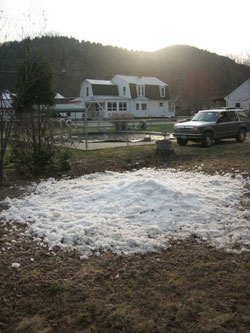 I always say there is a day when the day gets warm in that way where you know (or you think) it’s not going to get cold again and people get outside and start attacking their yards because they’re so darned sick of being outside and the air is full of dust from people getting the road salt out of their flowerbeds. I remember this from Seattle, a similar sort of day, when the rains finally stopped and it was sunny long enough for things to dry out and people came out from their apartments covered in lichen and moss and coffee stains and ennui to greet the returning sun.

So, that day was Friday here, I think, and then it continued all weekend. I did the raking of the grasses and the pruning of the lilacs and the filling of all the bird feeders and the picking up of all the junk that had accumulated in the yard. My last order of business, when I was so full of ENERGY that I just had to do something else, was to go after the iceberg that was melting too slowly in my backyard. Since there’s a plow that comes to do the driveway in the winter, there is also a pile of plowed snow. I’ve got a pile, my neighbor has a pile. Mine is, mercifully, in the sun. Hers is not. So as the sun was setting I was outside in shorts and a t-shirt hacking away at the little mound of snow with a rake for hours, hoping to get it flat enough that it would be melted, mostly, by today or tomorrow sometime and then I could actually see and get to my yard.

It’s school vacation week this week, which means no drop-in time and no classes just a vast expanse of sunny days. I’ll be scooting down to Boston to catch Matt Haughey at ROFLcon and see some folks and teach a library/tech class on Monday next. Say howdy if you see me.

Sometimes my body is safe at home and my mind is elsewhere. That’s sort of been the last week since I got back from a few weeks mostly gone. I did some things that I was pretty happy with. Here are some links to some of them.

Other than that, as everyone else seems to be getting their Spring on, there was snow here this weekend. I had a friend up from points South and it made for some dramatic Vermont show and tell. “Here is my favorite lookout. Wow, it’s snowing that’s crazy looking….” It didn’t stick though, and as the iceberg in my backyard melts (it’s currently blocking all non-snowshoe backyard access) I supposed I’ll get back out in it. Soon.

Normaller updates resume this week, but this worked in a pinch. I had another nice weekend in the Eastern/Western MA area. A list of the talks I gave is over at librarian.net. 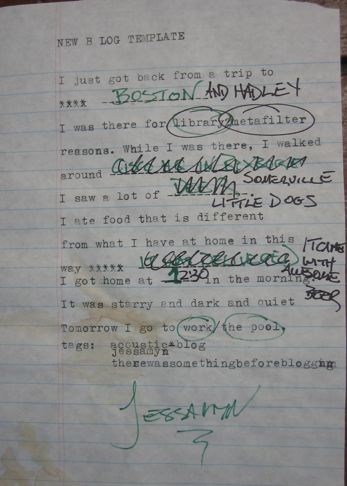