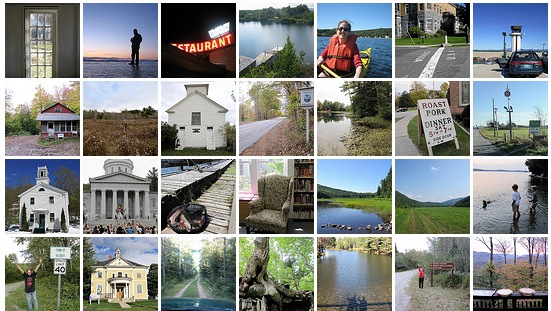 This was a rainy weekend. This is mostly fine with me because the improved weather has made me insta-wistful for all the chilly indoor data projects that I got to muck around with over the winter that will now lie fallow-ish until it gets nasty out again. But with the rains, comes a little extra time.

So my new nerdy project is to go back and photograph all the 251 towns (and four gores) that Vermont has and that I have been to. Some of this is simple–I have been to most of the towns around here hundreds of times–and some is difficult. When people talk about data collection and organization and how it’s all on the internet and really you go to school to be a librarian? and bla bla bla, I look at teeny little stuff like this. Of course, with a phone and geolocation and a ready Flickr account, starting this project today is simpler [for all the towns where I can get a cell signal, which is an interesting statistic in and of itself] than starting it would have been back in 2004 when my first photo is from. Similarly, many older photo and information organizing projects are these long tatting projects merging metadata and content, preferably in some sort of machine-readable way, where previously there had been a box of photos in an attic. I could do this stuff forever. Enjoying organization and metadata in this day and age, pretty much means that I will always have a job that will make me happy.

My workflow for today has been amusing, filling in some blanks. I figure I have about 1/4 to 1/3 of Vermont’s towns photographed. Here’s an example of what I’ve been doing.

Most of this starts because I have the memory of a photo. Often I can conflate that with a highlighted line on a map. Ultimately I’ll have clickable pixels and linked data and a neat thing to show people. I ge tto do this in-between keeping up with MetaFilter, running out to the post office and running out to the library where I just realized the book I am dying to read is actually checked in and on the shelf.

And speaking of neat things to show people, the other project for today was to start the Venture Vermont Outdoor Challenge. I know I sound like a weird shill for the Vermont State Parks, but really this is a fun project. A lot of little things to do, points assigned for the things you document, you send in documentation after you reach 250 points, you get a free parks pass for the rest of 2011 and all of 2012. It’s possible I lack imagination but I really enjoy the “Let’s pick from a list of things to do” process more than the “So, what do you want to do?” one. I started a little blog to keep track of what I’ve been doing on the project. That’s the rainy day report. There’s always something to sort around here.

So I’ve been gone for a lot of the past few weeks. People think it’s sort of a funny joke that there is a “high season” for library conferences but in the last month and change there have been five library conferences that I’ve been interested in and I got to go to three of them. Last weekend was bookended by MLA and CLA (MA and CT) which are both conferences that I really enjoy. Got back home Tuesday night with some pollen-induced sniffles and have been staring out the window or walking out the door, pretty much ever since.

The exciting news, which is not that exciting, is that I went in for my every-decade eye test and my vision is still good. Doc says I probably have two years til I need glasses, just on average. Coming from a family where everyone has worn glasses seemingly forever, I feel sort of ootchy because I always liked glasses. I hear that the thrill wears off pretty quickly. I also got a bone doc to look at my achey shoulder and she confirmed that it’s fine and I probably just need to do some shoulder exercises. I got sent home with my x-rays on a CD so I can look at my bones whenever I want.

While I was sitting around reading trashy magazines, I also asked the docs the questions I’d been waiting to ask.

Q for X-ray doc: What’s your opinion of the backscatter machines in the airport, and am I a crazy person for not wanting to go through them?

Q for eye doc: What’s your opinion on the Zenni Optical phenomenon? Would I be okay getting $10 glasses from China?

Answer: We always like people to have one professionally ground and fit pair of glasses so that they know what a good fit and a good pair of glasses looks and feels like. If they want to get a second or third pair of inexpensive glasses, that’s fine, but I worry that people will get a bad pair of glasses and not know that they’re a bad pair.

Here are some other things that have been cluttering up my desktop that you might enjoy.

The last two days I’ve worked short shifts at the local public library and there is something about walking the half mile to work at the public library in the morning in the almost-springtime that makes me exceptionally happy to be alive.