So I got home last night just about a week after I left. The road trip was great, a success, and I got to do a lot of fun things I hadn’t expected I’d be doing. If you’d like to just jump to the photos, they are here. However the one above is probably the best one. Here’s a daily outline of how my trip went. For people who like to follow along with these travels when they are happening, please feel free to friend me on Foursquare which is a little app I use to “check in” places and allows me to make little trip summaries like this one. While I pretty much always come back around to post updates here, occasionally there are bits of data stored in places like Foursquare, facebook, Twitter and Trip Advisor. Here’s the recap.

Reason for the trip: A friend got a job writing for Mad Men and had to move to LA basically yesterday. Had a car in Brooklyn that he wanted to have out with him. Car transport services take forever and cost a lot. I have a busted-up foot and can’t do much but sit. I figured sitting in a Mini Cooper was preferable to sitting at home. Plus work has been bugging me to take a vacation since forever. I offered to help.

Monday – The car was in Brooklyn. I offered to meet the car somewhere, but driving out of Manhattan was not going to be possible. I am okay driving in the city but don’t enjoy it and I am jumpy in other people’s cars. My friend’s brother had the car and we arranged to meet in New Rochelle NY. Jim dropped me off at the Providence train station and off I went. Minis have this weird little starting mechanism where there is a key-like disc, not really a key. I got into the car, said goodbye to my friend’s brother and realized I had no idea how to start the car. Also I was in a taxi zone. Figured it out, headed off. The big downsides to GPS devices is that they don’t really tell you what’s coming up. I’ve always liked how Google Maps will give you a list of choices, directions you might want to go. I was planning an I-40 trip but first I had to get out of NY which meant the George Washington Bridge (and traffic!) and a wrong turn in Jersey. The first 30 miles of my trip probably took 90 minutes. Then things picked up. I stayed in an unremarkable Howard Johnson’s in New Stanton PA which was super cheap and totally okay. Got up the next morning determined to make some time up.

Tuesday – Just drove drove drove. Ate beef jerky from the car and listened to podcasts and noted that there weren’t as many people in the rest areas as I’d expect. Stopped at a family restaurant called Dottie’s in Cuba Missouri and noticed the Route 66 mural and thought “Oh hey that’s around here isn’t it?” Peeked at Trip Advisor trying to choose among the interchangeable roadside hotels and was hipped to a cute little place called The Wagon Wheel that was just around the corner and on the historic highway. The price was right and the place was adorable but also sort of shrieky with tree frogs (one of which seemed to be in my room) and so my night was less restful than it could have been. I downloaded a white noise app for my phone. This was the last day I saw anything resembling traffic except for construction.

Wednesday – This seemed like when my trip really began. I went to Waffle House for grits and also stopped at the Missouri Route 66 Welcome Center which gave me maps and ideas of where to go next. I was making great time, so I decided to take some side trips down some of the disconnected parts of Route 66. Not only was this a nifty look into some American nostalgia [and of course I ate up the Wikipedia entries and learned a lot about 40’s-70’s era roadtripping] but the sorts of restaurants and hotels that were on these little disjointed parts of the old touristy highway were exactly what I was looking for. Places like the Crown Railroad Cafe in Flagstaff AZ and the River Valley Inn in Needles CA. I stopped in Shamrock TX and stayed at the Irish Inn which was run by Indian folks. I’ve noticed that the types of motels I tend to gravitate towards (off-brand, inexpensive, possibly old fashioned) had a tendency to be run by people from India and I wondered a little bit why that was. Apparently it’s the law of averages. Here is an interesting old New York Times article that talks about it somewhat. I liked the Irish Inn. It was right on the highway but also pretty quiet. They appeared to be renovating it as I slept!

Thursday – got on the road for a short trip to Santa Fe to see my aunt and uncle. Went to an incredible Texas rest stop after spending the previous day in Oklahoma where their rest areas are closed or non-existent and they have non-EZ-pass-taking toll booths that are unstaffed and require $1.15 in exact change! Terry and Jerry been exceptionally supportive and just present in my life, especially since my dad died and have repeatedly told me to come visit. Their place was almost on the way, so I stopped by. First real traffic of my trip and then headed up a mountain to stay with them at 8000 feet. Got to spend some quality time with them and their dog. Ate too much chocolate and got a headache from the altitude. Was happy to get to see familiar faces and I will have to come back again sometime.

Friday – Maybe could have pushed and made it all the way to LA but decided instead to do more Route 66 meandering. There was a decent guide on Wikitravel showing how to do this without winding up lost or thirty miles off in the wrong direction. I did some of the side routes from the Arizona and California sections. I really enjoyed looking out the window at formerly-hopping roadside America. Was very sad that I couldn’t stay at the Grand Canyon Caverns and their open air rooms. Wound up in Needles where I got a poolside room at a nice old motel and caught up on email and sleep before heading in to LA the next day.

Saturday – Needed gasoline and wound up having to get it in Ludlow which was a pity because it was very expensive gasoline, but a delight because I wound up eating at the Ludlow Cafe (not the old one, the new one) which is one of those “keepin’ it real” places you always hope you’ll wind up at complete with amazing coconut cream pie and some folks with a broken down car trying to get a ride in some direction other than the one I was going in. Historical Route 66 as it’s called parallels Route 40 in a lot of places, so it’s sort of fun to be zipping along on an empty road at 55 next to the big trucker highway where people are going 75 and getting to see more stuff including the big 66es painted in the roads. I got to my friend Michael’s house in Pasadena mid-day and then made the scary trafficky trip into Los Angeles to drop off my friend’s car later in the day. I was so terrifically relieved to hand over the keys to him, my friend who I had never met until this point.

I spent the rest of the trip hanging out with my friend Michael and eating tacos and going to the library and playing with his dogs and taking a long shower and finally flying home yesterday. Limping through the airport reminded me that I am still healing and coming back to a low-level MetaFilter kerfuffle reminded me that this is the first real vacation I’ve had in a while, years, and maybe I could stand to take a few more. 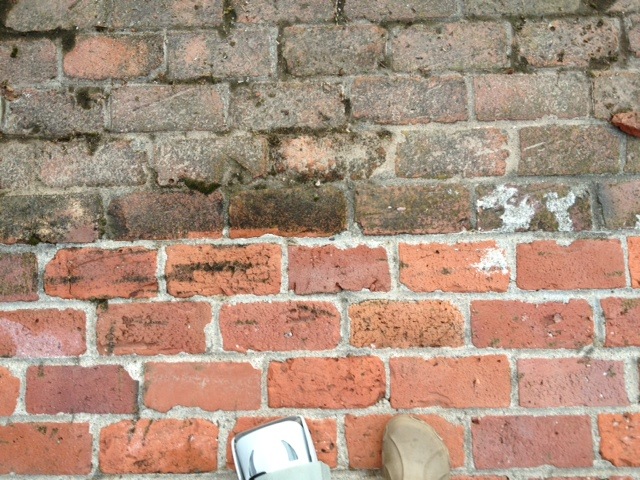 I have some friends who came down to Westport for a while and did one of those work vacation things. They spent some time here recreating and noodling around and taking advantage of the nice location and the decent weather. And then they spent some time helping me around the place. I was hoping for just a little gardening and weeding but they found the power washer and went to town on the patio along with helping out with a lot of other terrific things. I am still galumphing around in this boot (may be a few more weeks, otherwise I am feeling great) and it’s tough to describe what a wonderful thing it was to just have the place get all spruced up around me while I concentrated on working and getting sleep and eating well and getting better. I’m a pretty stubbornly independent person; having people around getting things done with no input from me and having folks to chitchat with over dinner and snacks was incredibly pleasant in a way I’m not really used to.

The week before this, Jim and I headed to Indiana on a fly-by trip to get the remainder of my Seattle stuff that has been in various basements since I moved from there “for good” around 2003. I still have a few misc. pieces of furniture in a few places (anyone know where my metal table got to?) but for now the bulk of my things are in places that are mine. Last step is to get the Topsham stuff which is temporarily in a friend’s shed into either my apartment or some nice yard sale or FREE pile somewhere. The trip was fun and short and filled with little nifty parts and I’d forgotten sort of how much I enjoy road trips, and Waffle House.

Which is good because this next week is going to be a Real Road Trip where I do the thing I used to love doing and drive someone else’s car across the country. In this case a friend of mine got a job in Los Angeles and has a Mini in Brooklyn and I have a free week more or less and there you go. I’m taking the first real week off of work that I’ve had in years (mostly my own fault) and this will be my first cross-country trip I’ve taken with a smart phone, as far as I can remember. And for longtime readers you will remember that I used to do this sort of thing a lot.

So I’m assembling some maps and NOT getting tour books from AAA and realizing that I don’t have to plan almost any of this and can still find good places to see and eat and sleep. Driving out, flying back. Hoping to be almost out of this boot by the time I’m back in MA/VT.

Seriously, look at this patio!