When I first got my ASKME license plate, a few people thought I’d get unwanted attention from it. I’m not sure what form this attention was going to take, but needless to say, it never materialized. I do get people commenting on it from time to time and I always consider it a sort of “outreach for librarians everywhere” situation. It usually goes like this.

Random stranger: *looks at license plate* Ask you what?
Me: Anything, I’m a public librarian!

And then they usually laugh and sometimes they’ll come up with some sort of reference question on the fly and I give them some sort of answer and we all walk away from it feeling nominally better about the whole thing. Friday night I got back late from my trip to Iowa [which went great, you can read more about my talks and adventures on librarian.net] and was driving through the parking garage exit/pay gate. It was late and I was a little bleary. When I got to the little kiosk, the guy there was already laughing.

I’m not totally sure what the funny part was and I’m not sure if I botched the question and I usually hate it when people call me dear, but for some reason this exchange — in addition to seeing hippies playing Jenga in the airport when I got in at midnight — cheered me, the equivalent of a footsie-wootsie for my well-being. I am going to have to admit at some point that as much as I am blase sounding about these wacky travel plans that usually go right but sometimes go a little weirdly wrong that secretly I like them.

That is, I don’t like the worry that I’ll miss my connecting flight when the airlines say they’ll “try” to hold the plane [I try very hard not to get all Yoda on their ass but really, you can’t just do it? or even not do it?]. I don’t like getting stuck in Utah at 11:30 on a Wednesday evening with no rental car where the rental car is supposed to be. I don’t like the fact that I somehow manged to make my reservations home for the wrong day and only noticed I’d screwed up when I went to print the boarding passes and the airline website was like “What? You’re not travelling tomorrow.” I don’t like eating road food for days.

But I do like the story of how they held the plane. And I like the story of how the rental car guy got out of bed at midnight and picked me up and drove me through abandoned Salt Lake City and would have let me take the RV to Nevada but as it was gave me a free tank of gas. And how I got to Elko Nevada at 3:30 am and the lady at the hotel desk told me stories about how she’d met the Rolling Stones. And I liked the part where I got home on the right day anyhow, and it didn’t cost me much more money and I’d saved all that money on the rental car anyhow after the guy said “Oh man I’m sorry about this, I’ll take care of you.” and did. And I like how most of the road food I ate was Basque, and incredibly delicious and worth all the extra time I’ll spend in the pool this week, and next.

And I love this photograph which, in the spirit of the cow that ate all the grass and went home, is the salt flats at 1:30 am, more or less. You’ll have to trust me on this. It snowed here today. It’s been a surreal week. 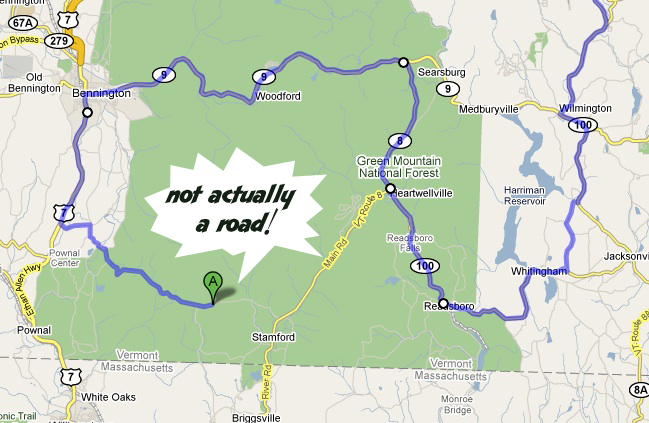 Because I have a rich online life, I sometimes have to nudge myself to have an equally rich offline life. I’ve been finishing a few more books lately, and yesterday I went for a drive. I have a family friend, who turns out to be a relative, who is 96 and who I just learned was a sort of neighbor. That is, he lives in Vermont which is neighbor enough. I made a plan to go see him saying I was going to be more or less in the area and made a plan, then, to be in the area. My relative is Irving Adler, my second cousin twice removed. He is 96 and he has strong opinions about health care. I spent some time visting with him and then did some catching up on the 251 project I’ve been working on for the past five years or so.

To catch you up, I want to visit all of Vermont’s 251 towns. I’m 90-someodd percent there. Before there was a widget for everything, I made my own web page to track my progress. I have a Delorme gazetteer that I cover with highlighter pen to track where I’ve been. Now there’s a widget that sort of does what I want but like all widgets, it’s imperfect. Through some concerted efforts and marathon driving, I went to sixteen new towns yesterday, though I missed three — Middletown Springs, Somerset and Windham — that assure I’ll be going back. The widget says I am 94% complete. The widget does not track gores and grants.

The gazetter is also imperfect. Even though I crosschecked with Google maps to see that the road that they said was a road was, in fact, a road, it was not a road. It was a road up to a point and then the road became a riverbed and then the riverbed became a footpath for goats. I turned around, which is awkward when you are in a car on a goat footpath. The nice people with 4×4 trucks, beer and few teeth were incredibly nice to me as I drove back past them and asked politely if the road I had been trying to drive on was, in fact, a road. “Not for that car!” they told me. I think AWD is sort of hot shit until I hit roads like this.

You can see my rough route in these two google maps (down, up). I checked my email twice during the day, once from the burrito place and once when I pulled over to take some photos of a nice looking lake. I pulled out my laptop to use my EVDO card to “check my web” and I saw that there was a nice four-bar signal coming from … someplace, called linksys. Now I’ve got 2-4 towns to visit in each quadrant of the state including the vexing Lewis which I swear can’t be reached by road. If anyone would like to go on a doomed hiking trip with me sometime in early spring, do give me a call. I can’t guarantee success, but there’s a 90-someodd percent chance of fun. The big deal in Vermont is that a lot of times you need to make your own fun. This is much easier if there are other people who share your views on fun. Last night, as the result of an Ask MetaFilter thread, Forrest and Kelly and I tested a recipe for non-tooth-breaking Popcorn Balls. I think we were successful. Then we both went home and uploaded our photos (mine, theirs) and told people about it.

It’s easy to sort of hang out in your cozy home as the days get shorter and suddenly look around and realize that while the internet and cooking and putting stuff away in filing cabinets is useful and possibly interesting, it’s rarely fun. It’s good to get started on this sort of thing before it’s too late.