I swore I was only going to write here again when I explained how the town finally got out of the lake, but it’s there still and I had a few things to say.

First, yeah wow, I’m a little surprised that it takes this long to correct an obvious map error, but that’s sort of the good news/bad news about doing your business in the cloud yes? Google Maps is great because it’s got a ton of data and delivers it to people with very little human interaction needed. Downside being when you need a human it’s pretty much impossible to get one.

I took a day off from writing yesterday (I’m ahead with my word count) and drove to Underhill after having lunch with my friend Stephanie in Montpelier. No idea how I missed Underhill before. In fact I’m pretty sure I must have been there before but the maps show no highlighter pen and I can find no record of it. Underhill is sort of a co-town with Jericho. They even have a shared website: Two Towns Online. The back road I wanted to take was under construction, a casualty of the weird snow we got this week, so I got to take fairly normal roads to get up there. And there was snow! I stopped at the local library [not the one in the photo] and did a little email checking. Once I got home I was curious about the funky looking building that also said library on it. Of course, there’s a web page explaining it.

I’ve installed keylogging software on my machine because I’m convinced that whatever amount of words I’m typing for the book, I’m doubling it with email, blog posts, chatting and whatnot. I wanted to check if that was actually true. I realize this makes me a crazy person. I will report back with my findings.

The bigger deal is just that as much as I’m enjoying writing this book, watching the word count increase, getting my thoughts on paper, I’m also somehat blasÃ© about it, sometimes to the point of being downright yawningly bored. I can’t explain to people what it’s about without apologizing and even though it’s all I think about lately, I feel like I have nothing to talk about when I chat with friends. “Still writing the book.” I say. “Great.” they say. And then we talk about the weather or something interesting. I realize that this is normal. I felt this way about my thesis. I’m sure I will miss these days, when the book wasn’t a set of words on a page but a set of ideas in my head. Fixing things to paper gives them a terrible finality that makes me somewhat nervous.

I look forward to having something else to talk about, just a month or two left. And in the meantime, I read quotations from the other Jessamyn West, who had been writing much longer than I have.

“Writing is so difficult that I often feel that writers having had their hell on earth, will escape punishment hereafter.”

I’m a little surprised this is taking so long but a Google Maps search for Randolph Vermont is still showing the town in the middle of Lake Champlain. I have done what I consider to be “all I can” to try to get this rectified including

We got word back that our issue has been escalated–apparently it’s happening to bigger towns than ours, all over the world–but nothing really. I tell people who are maybe coming here to make sure they type in the street address if they want to know where I actually live. And I guess I’ll wait, bemusedly, and entertain people on Twitter about it in the meantime.

And I’m skipping town. Not as a result of this obviously, but because it’s school vacation week. Jim and Milo are going to visit his folks in Arizona and I’m going to swing by for a few days. After all of the rain [and snow!] here in the last week, getting a little ninety degree desert time sounds nice, and I’ll be heading homewards before it starts to grate on me. It’s been a while since I’ve been in Arizona. I am looking forward to it.

And more on this in a while, but I reaized via some egosurfing that my book is actually available for pre-order from Amazon.com, despite the fact that it’s not even really written yet. Yes I know it’s expensive. You will not hurt my feelings if you don’t buy it. 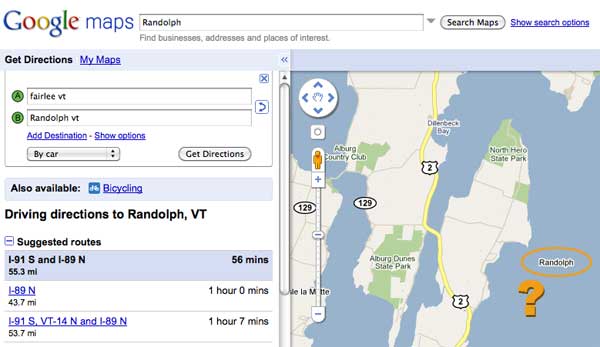 I am not moving. I am happy here. However, according to Google the town has moved to someplace in the north part of Lake Champlain. Yes, in the water. This is weird and sort of amusing. The only reason I happen to know this is because I was giving two different folks directions to my house and they both said “I thought you lived in the center of the state?” and I said “I do… WTF?” I have submitted a bug report. I am curious to see how long it takes to resolve this. If you can’t recreate the Fake Randolph on your own, you can click this link to see what I (sometimes) see. You can search for 05060 to see where the town really is.

As is typical, I’m back from a short trip [quickie hello Boston!]. I went to the gym to get some exercise and now I have the sniffles. Sometimes I wonder if I am just allergic to my home and have only a subconscious understanding of this and that’s why I travel so much. Or I am allergic to exercise maybe?

I got a non-apology from United Airlines that came with a $250 certificate for future travel which is pretty okay when I just asked them to refund the $8 I spent on parking for my dopey abortive trip to Portland. Along with all the meals with friends that I am not having in Oregon, I also missed a chance to talk to my book editor about my impending book. I got an extention on the thing til June and I’m sort of in the hustle phase of writing about the digital divide and technology instruction at public libraries.

The good news is that this is not difficult. The bad news is that I am a terrible procrastinator. Or rather, I am a good procrastinator. I am pretty alright at putting other “to do” things in the path of my non-writing so that, for example, I finished up my taxes yesterday. I rarely just click idly around the internet, though I am slightly captivated by the OwlCam. The trick at this juncture is not worrying about writing enough, but making sure I don’t leave anything out. I have checklists. I finally paid for Scrivener. I made a backup. Now I just need to … keep beginning.