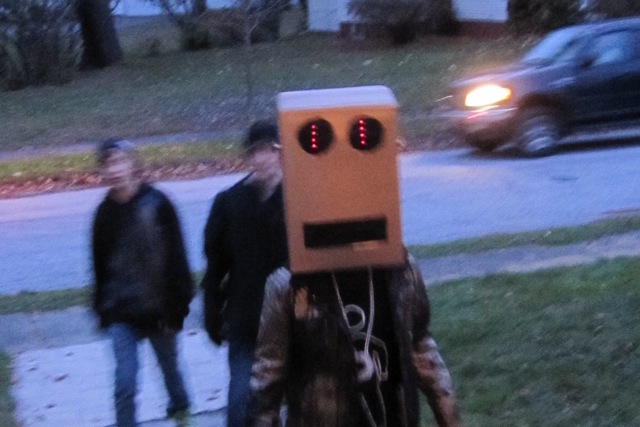 Depending on what circles you travel in, the title of this post is either just a normal thing that neighbors say to each other, or a reference to the first episode of the highly popular HBO series Game of Thrones. I haven’t seen the show but when I say it sometimes my friends will start riffing off of the tv series and I get all lost. Similarly, this costume showed up on Forrest and Kelly’s porch and I was all “Awesome!” and they were all “What?” [answer: Shufflebot, a character from LMFAO videos].

So my neighbor next door has a large pile of logs in his yard and I just saw that there’s now a wood splitter out there. I am hoping that maybe a team of people is going to help him get through them in a reasonable amount of time but when I mentioned this to another friend of mine he said “Nah that’s a week’s worth of wood cutting for sure.” So I am in nervous mode wondering when this place is going to erupt in wood-mauling noises and hoping it overlaps with my trip to North Carolina next week. Or maybe Thanksgiving. We didn’t get any of the bad weather that the southern New England states got. No power loss, almost no snow up where I am. I was enjoying a quickie trip to Kalamazoo and Grand Rapids for the Michigan Library Association conference but was, again, mildly concerned that my plane was going to be landing in some weather. It’s been a nervous set of weeks.

October was the busiest month I’ve had all year and back around a time when I was ready to be busy. Highest grossing too, which shouldn’t matter but does somehow. Now I’m back and teaching weekly Mac classes and I have what seems to be a staff retreat at the library tomorrow [thought it was going to be a short meeting until I was asked what I wanted for lunch] which I am really hoping goes well and does not include trust falls or other nonsense. I have to reassure myself that if I think most team-building exercises aren’t great, the three people who have been working at the library together for the last decade probably think they’re awful. Anyhow, we’ll be doing some strategic planning and I am sort of a little psyched about that.

So the days suddenly got short which is weird for sleeps-late me since MY days got really short, really quickly. In the “one more thing on the ‘positive self-talk’ list” shorter days means less time for wood-splitting action next door, though it may also mean it starts earlier.

Ultimately though I’m trying to pay attention to things that matter which include finding a new dentist [mine retired, I never thought I could find another one I liked, this new one is smart, nice, in town, and has a seashore print in his office that I swear my dad had in his house], a courduroy party with my fella tomorrow for 11/11/11, and a fridge full of soup I made myself [since the dented can store is closed for the forseeable future I have to make do]. Winter is coming. Maybe I can watch some of Game of Thrones.