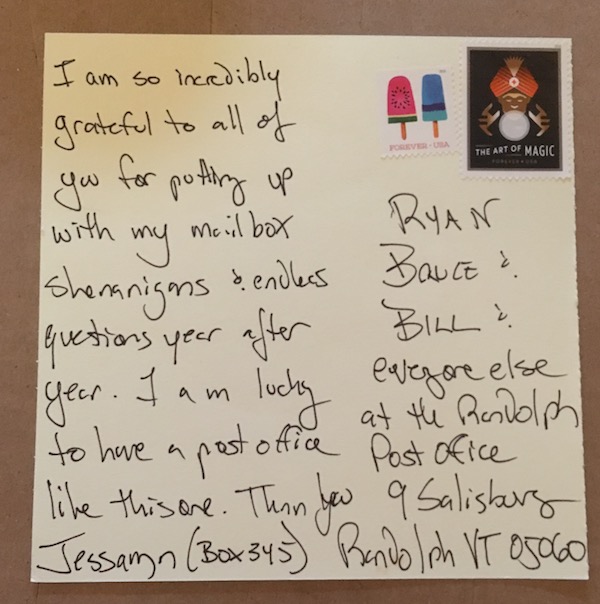 I was successful in my 50 x 50 project with my last postcard being one to the lovely men at my local post office to thank them for putting up with the deluge of quirky mail I received while I was gone for a month. I’m back in Vermont as of a few hours ago. I have that travel-zombie thing going on. I have a pile of postcards to look through at my leisure which will probably be tomorrow sometime. Jim is on his way up for the last official event of birthday week which is bowling with some local friends. I had a lot of big ideas for this big birthday. Some of them manifested into actual things. I’m pretty happy with how it’s all turned out. I didn’t realize until I actually went to get my mail that Box 345 may have been empty for a reason…. Not totally sure what is going on here, but they said they’d fix it.

I decided to get a post office box again even though I don’t need one because I do enough workish-stuff through the mail that having a non-home place to get mail seems like a good idea. In the post-9/11 world, you need to prove what your home address is to get a PO box. Since I got the PO box before I moved, and I can’t get mail delivered to my house in Bethel, I had to get a note from Ola saying that I live here. Ola thought this was amusing and scrawled me a note in pencil. The post office found this amusing but what could they do, say “go back and have her type this”?

My new mailing address has a nice sort of number pattern to it. Box 345, Randolph VT 05060. The box has a combination (letters instead of numbers) so I don’t need to carry a key around with me. Today is moving day.

I got back from the MLA conference and my little write-up is here. I gave a talk that went well, and I got to see a bunch of friends that I don’t see nearly enough.

Just recently, however, I got back from the post office. I had a few little packages, two postcards, some frequent flier flyers and some mail for Ola. I talked to the lady at the post office about the rate changes going into effect this month, Unlike past rate changes where the costs increment by a few cents, this rate change is complicated. The post office calls these “more choices” a feature. A few highlights

– The second ounce rate for heavy mail is actually going down instead of up
– The postcard rate goes up to 26 cents, thereby missing the 25 cent sweetspot that I was hoping for.
– There is this new weird hack called the “forever” stamp. In brief it’s a stamp that will allow you to mail a first class one ounce letter, forever. If rates go up, you can still use this stamp that you bought for less. It’s got a picture of a liberty bell on it. I wish it were more attractive because I’d like to buy a thousand off them. I love a good deal.
– Otherwise, a lot of rates are changing to include stuff like the size of your package or parcel which I think is just going to drive more people to Fedex and UPS. It may also encourage Amazon to use more appropriately sized boxes for some of the stuff they sent [I got a gift card in a box the size of a loaf of bread once]

I feel pretty unique in my generation as someone who is both a heavy post office user who is NOT running a business. I don’t think any of these changes will be a big deal. After living in Romania where you had to pretty much supply your own glue for the stamps and sew bags for your international parcels (this was in 1995, no I am not making this up) I am actually mostly happy with the post office and my post office in particular.